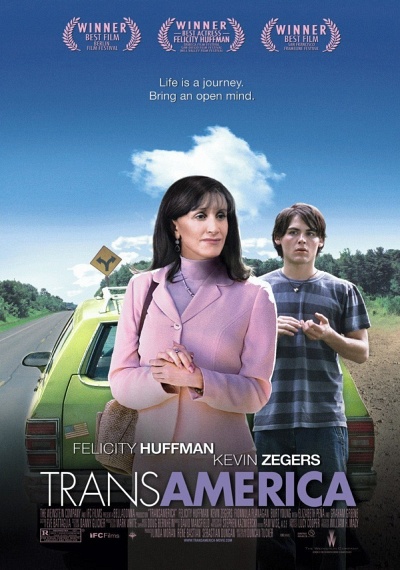 Bree (Felicity Huffman) is a perfectly adjusted conservative transsexual woman. Born Stanley, a genetic male, she's about to take the final step to becoming the woman Stanley always wanted to be - until she finds out that she is the parent of a long-lost 17 year-old son (Kevin Zegers). Afraid to tell the rebellious teenager the truth, Bree embarks on a journey with him that will challenge and change both their lives and bring them closer to the truth of their connection. Transamerica is a funny, touching, completely modern look at the modern American family, starring Emmy award winner Felicity Huffman and Kevin Zegers. Transamerica has won numerous festival prizes, including awards for best film at the Berlin Film Festival, San Francisco's Frameline festival and the Woodstock Film Festival, and the award for Best Screenplay at France's 2005 Deauville Festival of American Film.