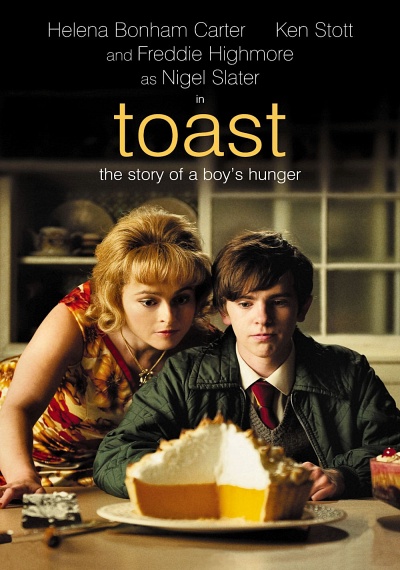 Based on the bittersweet story of food writer Nigel Slater's childhood, and set to the songs of Dusty Springfield, TOAST is a delicious love letter to the tastes and smells that a young boy associates with his journey into adulthood. Nigel's Mother was always a poor cook, and her addiction to all things canned isn't helping. Nigel, on the other hand, laps up cookbooks as if they were porn, and spends all his free time gazing longingly at the delights offered at Percy Salt's grocery shop. Nigel's Dad worries there is something "wrong" with his son and the two find it difficult to connect, so Nigel finds friendship and a father figure in Josh, the gardener. As his mother's illness worsens, so do Nigel's relations with his father -- the Bolognese he cooks is far too exotic, the uncooked Fray Bentos pie MUST be finished, and his father's rage as Nigel insists on picking every last bit of jelly off the canned ham at the annual picnic hits an all time high. Dad then fires Josh for reasons unknown to Nigel. Just before Christmas, Nigel's mother dies, leaving Nigel and his father heartbroken. Their touching efforts to look after each other, often through gestures with food, sadly seem to miss the target. His father begins to spend his evenings at the Masonic lodge until a new cleaner, Mrs. Potter, arrives on the scene. Mrs. Potter's curves, charms and lemon meringue pies quickly bewitch Nigel's father and much to Nigel's horror, the three soon embark on a move to the country. The one silver lining in the cloud of a new school is Domestic Science class, where Nigel can finally shine. Cooking soon becomes the key weapon in the battle for Dad's affections. Ironically, the main casualty of these culinary skirmishes between Nigel and Mrs. Potter is Nigel's father, as his waistline grows and grows. Hoping to escape the madness, Nigel lands a job in the kitchen of his local pub. It is here that Nigel's eyes are opened to a world of culinary opportunity.