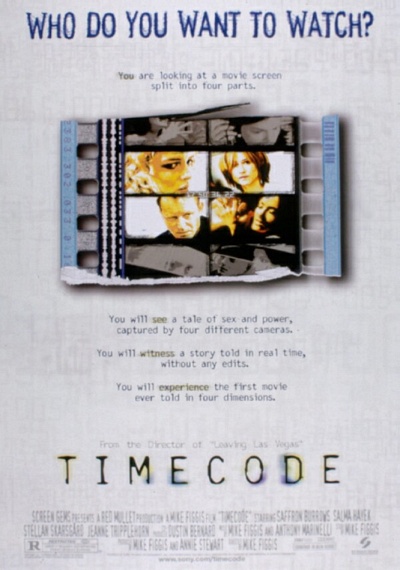 Timecode is an exciting, innovative new film project from acclaimed director Mike Figgis that breaks all the rules. Part of Figgis' daring evolution towards the ultimate in minimalist film production, the film was shot in one day entirely with hand-held digital video cameras in sequence, in real time with no editing. The plot-a black comedy thriller set against Los Angeles lifestyles-literally unfolded before the cameras as the actors each forged an improvised trajectory for their characters based on the central elements of an affair, a murder and an ensuing Hollywood mystery. Four main characters are at the center of the plot: Stellan Skarsgerd is a motion picture executive; Saffron Burrows is his wife; Salma Hayek is an aspiring actress in the midst of an affair; and Jeanne Tripplehorn is a woman whose actions will alter all their fates. Mystery, comedy, intimate drama-these and much more result as the cameras roll for 93 consecutive minutes.