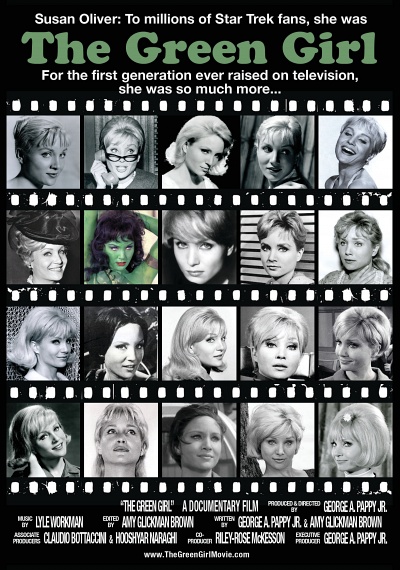 Susan Oliver, the original Star Trek's iconic Green Girl, has appeared in the end credits of re-runs of this series on a near-daily basis since the late 1960's. But it was no coincidence that Gene Roddenberry sought her out to play the pivotal role in the pilot episode of his ground-breaking new television series. Arriving in Hollywood at the very end of the old Studio System, she made her mark in a handful of notable films but never quite broke out as a huge star. Yet, Susan Oliver became one of the most photographed women of her era, virtually a household name, the female television guest star of choice between 1957 and 1973. She was not only a prolific actress of the '50s - '80s, but an original member of the AFI Directing Workshop for Women (and one of the only women directing major TV shows in the 1980s), and a record-setting female aviator before we tragically lost her to cancer in 1990. And yet Susan Oliver has been inexplicably forgotten by the industry to which she gave so much of herself. This documentary chronicles the remarkable achievements of her all-too-short life.