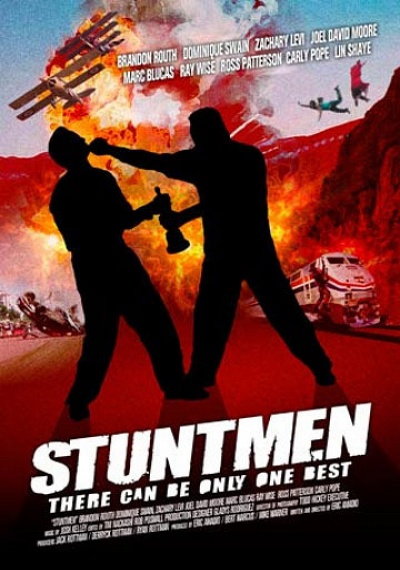 The 75th annual Stunt-awards are rapidly approaching and an ambitious, young documentarian sets out to capture the merit presented to these brave men and women who risk their lives in the name of cinematic glory. With his trusty cameraman in tow, our documentarian Steve uncovers a scandalous rivalry between the top two stuntmen in the industry. On the brink exposing a dark secret, Steve immerses himself in all that is stunt and soon discovers that he may have bitten off more than he can chew. Eligh Supreme has stunt-work in his blood. His great grandfather Neo Supreme practically invented the occupation; so it's no surprise that today he is one of the industry's leading men. Though he's at his zenith professionally, Eligh's personal life is at an all time low. His soon-to-be bride was poached from the wedding alter by his former friend and pupil, Tank Macho. To make matters worse, Tank has also been nominated for the coveted Stuntman of the year award along side Eligh. Crass, crude, and vulgar; Tank is the stark contrast to the mild-mannered (and slightly effeminate) Eligh. Tank flaunts the fact that he has stolen Eligh's ex-wife, stuntwoman Mindy Danger; a blonde bombshell with a voracious sexual appetite. Much to Eligh's chagrin, her infidelities have become a public spectacle, thanks in part to the various articles and press reports that are enthralled with this celebrity culture. As the award ceremony approaches the battle between Tank and Eligh escalates in classic Hollywood style; they do not confront each other, they have their agents do the dirty work for them. Celebrity friends of both are forced to choose who they will back as a literal line is drawn down the middle of the award venue. As a result of the shenanigans, the ceremony is blackballed by all in Hollywood and forced to be held at the Elk's lodge. Meanwhile Steve has been snooping around, attempting to get to the bottom of the all of the pandemonium. During this time Steve discovers a secret that has the possibility to destroy Eligh and turn the Stunt world on its head. With only his trusty cameraman to help with moral guidance, Steve must make a decision that will forever change lives.