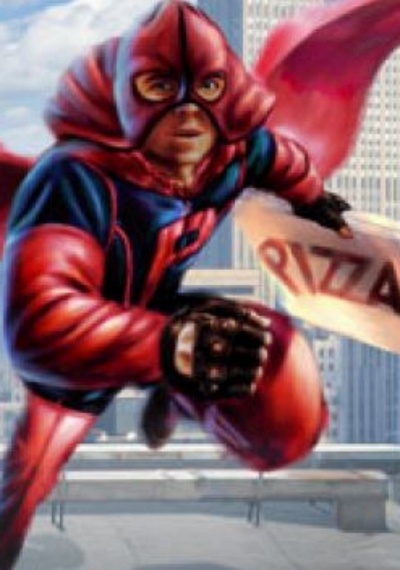 Matt Burns is many things -- loser, dork, pizza delivery boy -- but a hero isn't one of them. That is, until he is forced to eat a genetically-engineered tomato that was designed to create super soldiers. A routine pizza delivery turns into a fight for his life, when he accidentally stumbles into the middle of a heated corporate takeover that plans on using this science for world domination. Equipped with an indestructible body and advanced strength, Matt must choose to use his new power to fight the E.D.G.E. corporation, led by its conniving and murderous VP John Kryder. When Kryder threatens Matt's mother for information, Matt dons their parlor mascot costume and becomes PIZZA MAN. But it takes more than a costume and powers to become a super-hero, as Matt learns the hard way. Coordinating his new abilities while trying to earn a modicum of respect among those he is fighting and saving is easier said than done. Against all odds, Matt must rise to the challenge, rescue the girl and save the day as the unlikeliest of super-heroes: PIZZA MAN.