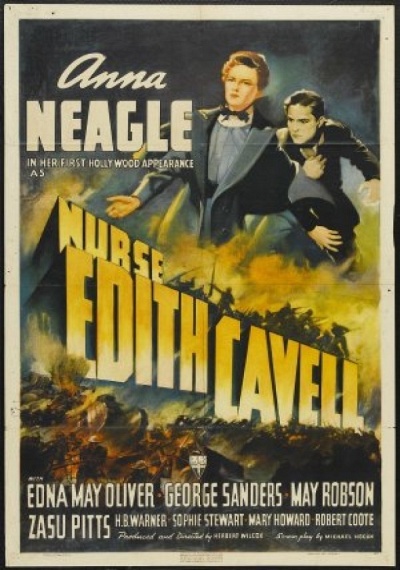 Many of the "preparedness" films of the years just prior to World War II sidestepped censorship by depicting past outrages of the Germans. Such a film was British producer Herbert Wilcox's Hollywood production Nurse Edith Cavell, in which Wilcox's future wife Anna Neagle portrayed the titular martyred Englishwoman. Ms. Neagle plays the legendary Ms. Cavell as a candidate for Canonization. Her selfless efforts to rescue refugee soldiers from World War I Belgium results in her being arrested on charges of espionage. Despite international pleas for clemency, the dastardly Deutschlanders sentence Edith to death. She faces the firing squad with a courageous serenity that makes Joan of Arc look like a hysterical schoolgirl. An earlier, silent version of Nurse Edith Cavell had caused turmoil in England due to its unadorned depiction of war's horrors. In 1939, however, audiences inundated by reports of Hitler's latest outrages were more receptive.