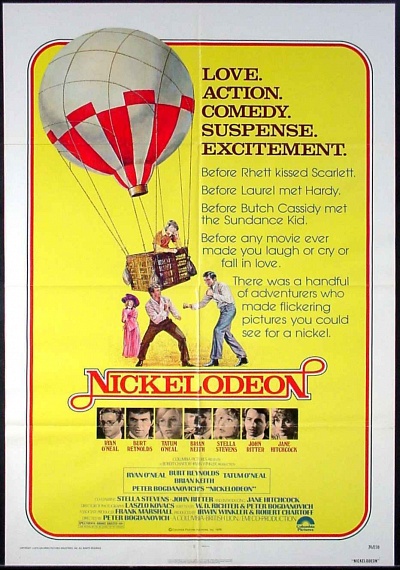 A hapless, hustling young attorney, Leo Harrigan (Ryan O'Neal), is on the run from an irate client when he falls into the hands of pioneer independent filmmaker H. H. Cobb (Brian Keith). As Harrigan begins writing for Cobb's Kinegraph Studios, he meets Kathleen (Jane Hitchcock), an aspiring actress, and falls instantly in love. Hoping to avoid the prying eyes of larger, rival production companies, Cobb hustles Harrigan off to direct several silent action films in the prairies of the Midwest. Although one of the major studios sends an enforcer, ex-alligator wrestler "Buck" Greenway (Burt Reynolds), to make trouble, after a fight with Harrigan, he agrees to join the company as its leading man. And during the filming of an action sequence, Buck and Kathleen are brought together in the basket of a runaway balloon and agree to marry. The entire crew, including Alice (Tatum O'Neal), a teenage truck driver who runs her own prop rental business, moves to Hollywood where they walk into a nickelodeon that is showing edited versions of the films they have been sending Cobb. Irate, they confront the studio tycoon and announce plans to form their own company. But the restrictions of a large studio and a romantic triangle conspire to break up the relationship until they reunite at the opening of D.W. Griffith's "The Birth of a Nation," where a new age in filmmaking is born.