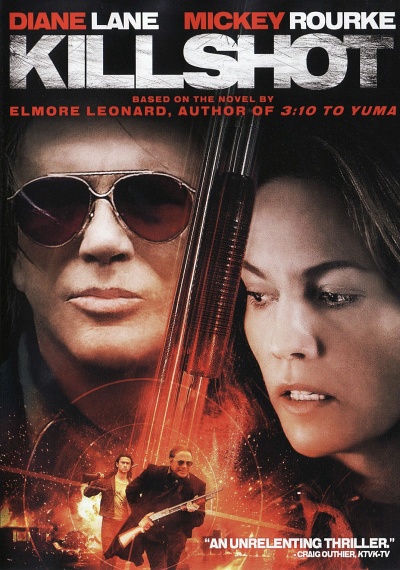 Carmen and Wayne Colson were in the wrong place at the wrong time. But now they've seen too much and Armand "The Blackbird" Degas, a half Ojibway Indian, half French Canadian hit man, doesn't like loose ends. So after witnessing a failed extortion attempt, an innocent couple is on the run, and even the Witness Protection Program doesn't seem to be enough to keep The Blackbird and his partner Richie Nix off their trail. Killshot is the latest adaptation from Elmore Leonard, the master thriller writer who also gave us Out of Sight and Get Shorty. The film is being produced by Richard Gladstein (Finding Neverland, The Cider House Rules, The Bourne Identity), Executive Produced by Quentin Tarantino (Sin City, Kill Bill, Vol 1 and Vol 2, Pulp Fiction) and directed by John Madden (Shakespeare in Love, Best Picture Oscar winner in 1998). Starring Diane Lane (Unfaithful, Under the Tuscan Sun), Mickey Rourke (Sin City, 9 1/2 Weeks), and Rosario Dawson (Rent, Sin City, Alexander).