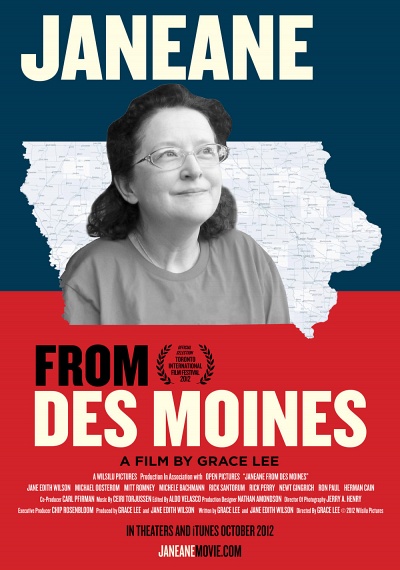 Janeane Wilson is a conservative Iowa housewife who works as a home health aide, keeps busy in her garden, and attends a local women's bible study group. But as the 2012 presidential election draws near, she is determined to find a Republican candidate who will take America back from the Democrats, repeal Obamacare, defund Planned Parenthood and get rid of gay marriage issues that she feels are destroying the country she loves. She dives into Iowa Tea Party politics and the lead-up to the Iowa caucus, but a crumbling economy causes her to lose everything she holds dear. Janeane loses her job, her marriage, her health, and her home. As Mitt Romney, Michele Bachmann, Rick Santorum, Rick Perry and Newt Gingrich crisscross Iowa during her hour of need, Janeane presses them for answers that she and many of her fellow Americans would like to hear. Starring Jane Edith Wilson and directed by Grace Lee, this work of political fiction is a cautionary tale about a true believer whose faith is severely tested.