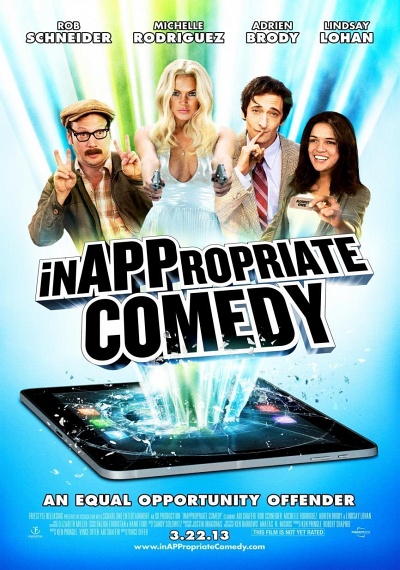 In the shocking and hilarious, no-holds barred sketch movie InAPPropriate Comedy, a computer tablet full of the world's most hilariously offensive apps and a cast of stars break through the borders of political correctness, stirring up cultural anarchy along the way. InAPPropriate Comedy stars Academy Award-winner Adrien Brody as "Flirty Harry," a tough, no-nonsense cop with a flare for fashion; Rob Schneider in a dual role as both a sleazy psychologist and a curmudgeonly porn critic alongside his enthusiastic counterpart Michelle Rodriguez; Lindsay Lohan living out her fantasy of taking an ultimate revenge on the paparazzi who haunt her, and Ari Shaffir as "The Amazing Racist," whose hilariously offensive hidden-camera encounters with members of different ethnic and minority groups push everyone's buttons. The film is directed by Vince Offer, from a script by Vince Offer, Ari Shaffir and Ken Pringle, and produced by Ken Pringle and Robert B. Shapiro through Square One Entertainment.