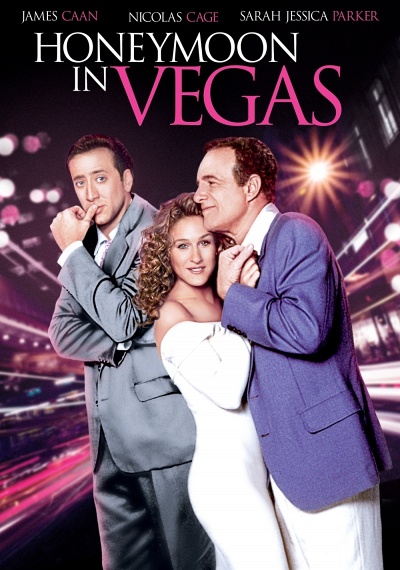 On her deathbed, Jack Singer's (Nicolas Cage) mother makes him swear that he will never get married. Later, when his girlfriend Betsy (Sarah Jessica Parker) announces that she wants to start a family, he decides that they should immediately fly to Sin City for a Vegas wedding. Upon landing, he gets cold feet and instead joins famous cardshark Tommy Korman (James Caan) for a poker game. Korman hustles Jack into losing over $100,000, however, Korman has a solution; he has seen Besty in the hotel lobby and she's a dead ringer for his late wife, so he proposes that if Betsy spends the weekend with him, he will forgive Jack's debt. At first she merely thinks that Jack is procrastinating on the wedding and demurs, but finally goes with Korman to Hawaii to teach jack a lesson. Once she gets there, Korman turns on the charm and soon she ends up falling for him….leading Jack to try anything to get her back, including a famous scene where he skydives from a plane with a group of traveling Elvises.