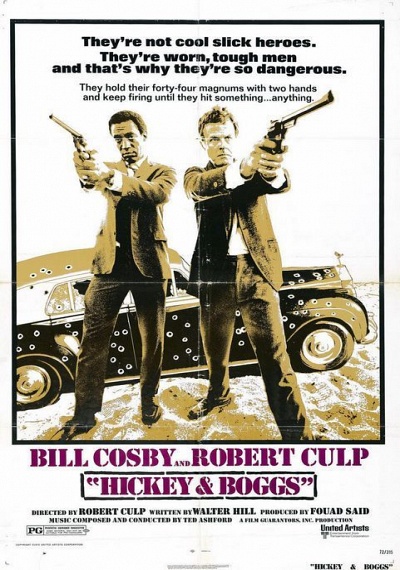 The stars of the witty TV series I Spy were reunited for this crime thriller, which takes a much darker and more violent look at the lives of two detectives for hire. Al Hickey (Bill Cosby) and Frank Boggs (Robert Culp) are a pair of private eyes who are approached by an attorney to find his girlfriend, who has gone missing. Their investigation leads them to a large sum of money from a Pittsburgh bank robbery. It seems that the woman in question has married the leader of a leftist radical group, which is now trying to find a buyer for the tainted money. An attempt to recover both the money and the girl goes awry when Hickey and Boggs infiltrate a meeting with the radicals; the girl slips away and takes the burgled cash with her. Adding to the disaster, the meeting tips off the identity of the detectives to mobsters dealing with the radicals, and the gangsters execute Hickey's wife in an effort to keep him away from their activities. Hickey and Boggs also features Rosalind Cash, Michael Moriarity, Vincent Gardenia, Isabel Sanford, and James Woods.