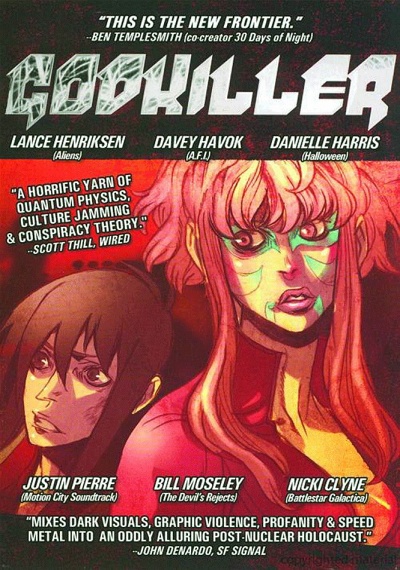 GODKILLER is the epic story of a boy on a quest to save his sister. 16-year old Tommy (Justin Pierre, Motion City Soundtrack) lives with his sickly younger sister in a ravaged, post-nuke borderland. When he discovers his sister will die without a new heart, Tommy follows an organ-stealing prostitute named Halfpipe (Danielle Harris, Halloween) into the savage Outer City on a quest to find a new heart for his dying sister. Once beyond the safety of his orphanage, Tommy discovers a war-torn land controlled by the evil fallen god Dragos (Davey Havok, AFI). Aided by wizened holy-war veteran Mulciber (Lance Henriksen, AVP: Alien vs Predator) and scrappy bounty hunter Soledad (Nicki Clyne, Battlestar Galactica), Tommy will have to stand up to Dragos' wrath before he can return to save his sister. "A horrific yarn of apocalypse, quantum physics, culture jamming and conspiracy theory." -Wired Magazine