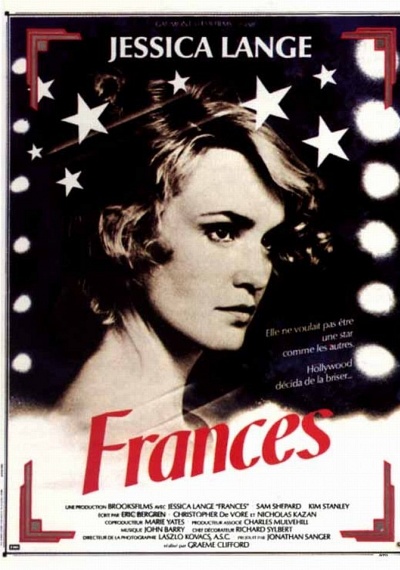 As played by Jessica Lange, Frances Farmer is a rebel from the word go, winning a high school essay award by writing a piece in defense of Communism. Determining to become an actress, Frances is equally determined not to play the Hollywood game: she refuses to acquiesce to idiotic publicity stunts, and insists upon appearing on screen sans makeup. Her defiance attracts the attention of Broadway playwright Clifford Odets, who convinces Frances that her future rests with the Group Theatre. But once she leaves Hollywood for New York, Frances learns to her chagrin that the Group intends to exploit her movie fame in order to draw in customers. Her desperate attempts to restart her movie career, combined with her increasing dependence on alcohol and the pressures brought to bear by her monster mother (Kim Stanley), result in a complete mental breakdown. Even while institutionalized, Frances is abused by the powers-that-be; she is forced to undergo an injurious brain operation, is treated like a mad animal, and periodically raped by the inmates. Frances is released in the custody of her mother, who persists in browbeating her tortured daughter until Frances discovers the legal means to break away. The real-life Frances spent her last years as host of a local Indianapolis TV program, dying in 1970 at age 57; the film comes to a climax when Frances is feted on the smarmy network program This is Your Life. Other actual personages depicted herein include Clifford Odets (played by Jeffrey DeMunn), Harold Clurman (Jordan Charney) and Ralph Edwards (Donald Craig). Frances' first husband Leif Erickson is fictionalized as "Jeffrey York", and played by Lange's real-life inamorata Sam Shepard. And if you listen closely, you'll hear the voice of Kevin Costner, whose minor role was whittled down to one line when he, like Frances Farmer, had the temerity to argue with the director. The unhappy life of actress Frances Farmer was also covered in Farmer's auto