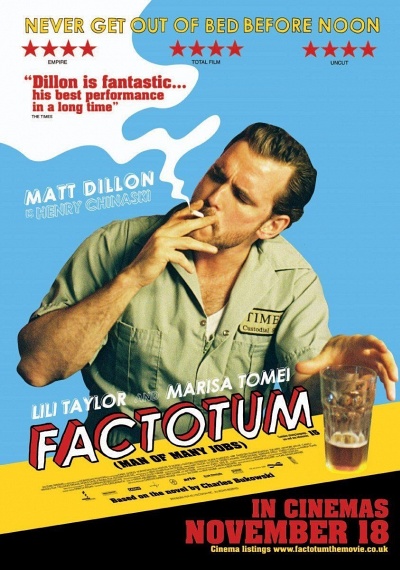 Based on the book by Charles Bukowski, Kenneth Turan of the LA Times recognized the literary value of Norwegian director Bent Hammer's approach to FACTOTUM, calling it "a surprisingly satisfying film, true to Bukowski and itself, a work that manages to make the man and his profane world more palatable without compromising on who he was and what he stood for." Hammer's previous film was KITCHEN STORIES; he most recently directed the acclaimed O'HORTEN. Henry Chinaski (Dillon) considers himself a writer, and on occasion writes. Mostly he quests for the booze and women that sidetrack and seduce (like that played by Oscar winner Marisa Tomei), rather than inspire. When he falls for Jan (Lili Taylor), the soulful connection fails to save either from their self-destructive ways, and the relationship totters between earnest connection and reflective loathing. FACTOTUM is the story of a writer who risks everything, tries anything, and finds poetry in life's pleasure and pain.