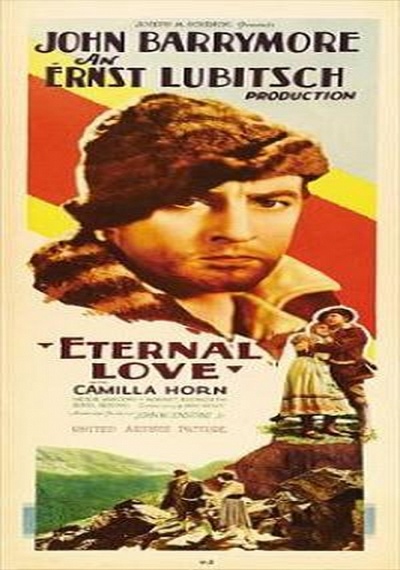 The final silent film by Ernst Lubitsch, several years after he departed his homeland Germany for Hollywood in 1922, ETERNAL LOVE is a powerful story of love, war and tragedy on a Swiss mountaintop. Marcus (John Barrymore), a hunter and a hero of the village, refuses to hand in his gun during the 1806 occupation by French soldiers. He needs his gun to protect his lady-friend Ciglia (Camilla Horn) with whom he is deeply in love. But a wild, jealous and vindictive mountain girl, Pia (Mona Rico), wants Marcus entirely for herself. She will cause an avalanche of troubles causing our two heroes to run and save their lives and their love. The film was restored from a 16mm print that was found in the film collection of Mary Pickford, re-released with its Vitaphone music-and-sound-effects track in the 1990s. Even if you are not a fan of the silent era, the unforgettable photography of ETERNAL LOVE and its absolutely grandiose finale is a must see. You will love it. Eternally! - Stela Jelincic