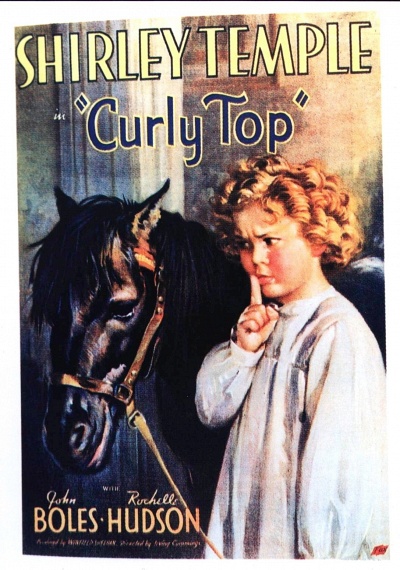 This adaptation of the oft-filmed Jean Webster novel Daddy Long Legs has been tailored to the talents of Shirley Temple. The orphaned daughter of vaudeville entertainers, Elizabeth Blair (Temple) is the most precocious charge at super-strict Lakeside Orphanage, regularly disrupting protocol with her extemporaneous performance of such songs as "Animal Crackers in My Soup" at the dinner table. While paying a visit to the orphanage, wealthy trustee Edward Morgan (John Boles) is enchanted by cute little Elizabeth -- and even more so by the girls more mature sister Mary (Rochelle Hudson). He secretly arranges for the sisters' release from the institution, sets them up in a lavish mansion, and finances their education. When Mary almost falls in love with another man, it is miss-fixit Elizabeth who brings Mary and Edward together, capping this bit of cupidity with her trademarked exclamation "Oh, my goo'ness!" The first Shirley Temple vehicle specifically aimed at children, Curly Top contains some wonderful character bits from its adult cast, notably Etienne Girardot, Rafaela Ottiano and Jane Darwell as the orphanage officials and by Arthur Treacher and Billy Gilbert as the hero's household servants.