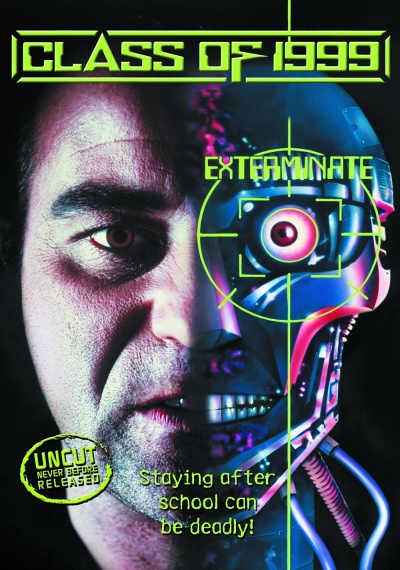 Mark L. Lester&#39;s follow-up film to his Class of 1984 is a rancidly violent peek at a near-future high school world of terror &mdash; The Jetsons meet The Terminator. In Lester&#39;s world, total anarchy rules (at least in Seattle). Classrooms are sinkholes of violence, and around the kill-zone high schools &quot;Free Fire Zones&quot; are set up that look like re-creations of Dachau. Rival youth gangs roam these areas with enough artillery for a second Vietnam War. The gangs&#39; insane violence is exacerbated by a drug called Edge. When the Department of Educational Defense needs to supply new teachers, they look to a secret government agency headed by Dr. Bob Forrest (Stacy Keach) who sends new teaching recruits (Pam Grier, John P. Ryan, Joshua Miller) to the beleaguered high school. These novice teachers are not your ordinary teaching-college graduates, however. They are &quot;tactical education units&quot; &mdash; cyborgs reprogrammed to teach readin&#39; and writin&#39; and &#39;rithmetic. If the students don&#39;t learn their daily assignments, they learn an even bigger lesson &mdash; learn or die. The strict disciplinarian robots compel the student gangs to unite and fight the new educational menace. Under the leadership of Cody Culp (Bradley Gregg), who has just gotten out of reform school and has seen that there is more to life than killin&#39; and cuttin&#39; and Edge, the punks take up arms against the cyborgs who are invading their high-school turf.