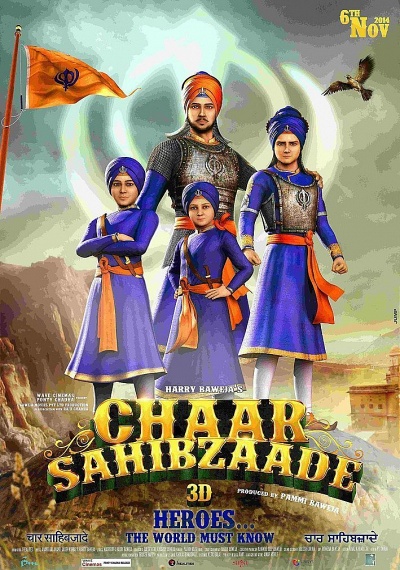 Chaar Sahibzaade is India's first animated Punjabi Historical Drama based on the history of Sikhism, ideology of love, compassion and sacrifice which are the core principles of the Sikh religion. The film traces the journey of 10th Sikh Guru Gobind Singh's four warrior sons Ajit Singh, Juzhaar Singh, Jorvar Singh and Fateh Singh. The story begins with the invasion of India by the Mughal and the Turkish kings, and the protector Guru Tegh Bahadur (9th Guru of Sikhs) who sacrifices his life for raising the voice against the persecution of Kashmiri Hindus. The film depicts the Battle of Chamkaur which took place in December, 1704 AD in which 40 men commanded by Guru Gobind Singh, founder of Khalsa, fought bravely against a vast army of Mughal forces led by Wazir Khan. The valiant Sikh warriors were outnumbered but countered the invading forces with martyrdom.