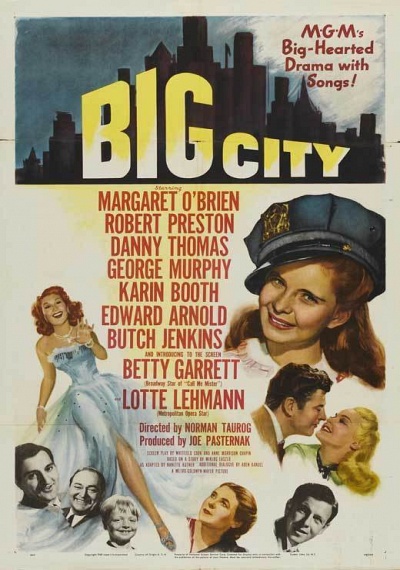 Margaret O'Brien sings, dances and keeps the faith in this heartwarming musical drama co-starring Robert Preston, Danny Thomas and George Murphy. Midge (O'Brien) is the luckiest girl in New York. Found abandoned as an infant, she's adopted by a cantor (Thomas), a reverend (Preston) and a Catholic cop (Murphy), who raise her together as only three loving fathers can. But when the police officer marries a saloon singer (Betty Garrett) and insists on sole custody, the trio winds up in court, where Midge, with the help of a kind-hearted judge (Edward Arnold), must decide what's best for her fathers as well as herself. Highlighted by opera legend Lotte Lehmann in her only American film appearance and featuring Broadway star Betty Garrett in her big-screen debut, Big City is MGM at its musical best.