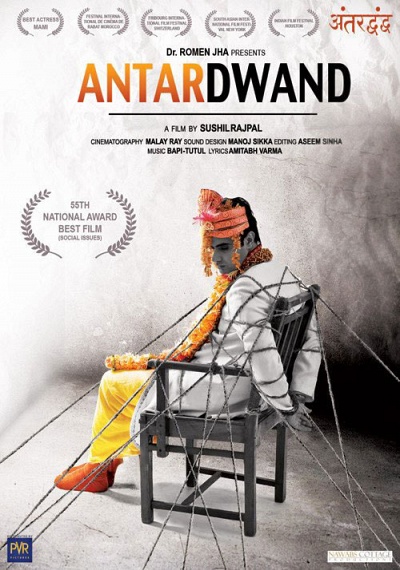 "Delhi University. A romance. An accidental pregnancy. And the act of announcing this to his conservative parents is just the beginning of the explosion of emotions and events that Antardwand unfolds. The boy - Raghuveer who has just appeared for his Civil Services exams is admonished by his father against marrying his pregnant girlfriend in Delhi. Distraught and defenseless Raghu terminates his visit home in the interiors of Bihar and leaves for Delhi. But before he could get out of the village he gets ABDUCTED by another headstrong and ambitious father of a girl wanting to have a potential IAS officer as his son-in-law. The boy is forcibly married off at a gun point much against his and the girl's own wishes. Once married, they are locked up in a room for days until they consummate their marriage and accept each other completely....but do they accept each other in the face of inevitability? Groom Abduction or "Pakrauah Shaadi" so rampant in Bihar and Eastern UP is touched upon in Antardwand. The film is a peep into the reality that is mofussil India, a feudal India refusing to die, it's a story where everybody involved pay a heavy price for the ugly patriarchal power play… it's a society rotting while the country surges ahead to be a global power. Antardwand is a film that stokes the sensitive, thinking viewer's ire, concern and empathy."