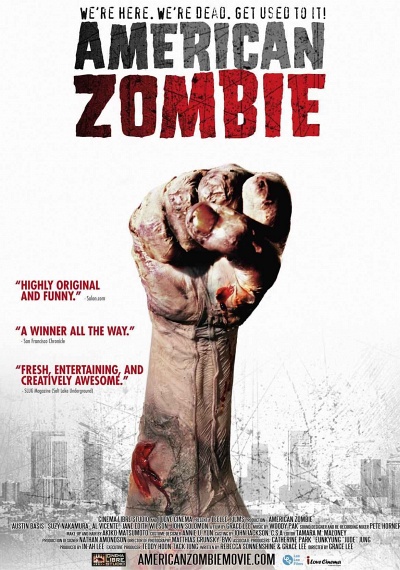 American Zombie tells the story of two Los Angeles filmmakers who set out to document a group of highfunctioning zombies and their struggle to gain acceptance in human society. Despite their wildly different working styles, Grace and John manage to chronicle the hopes and dreams of four fascinating subjects: Ivan, a convenience-store clerk who longs for a career in publishing; Lisa, a florist trying to recover her lost memories; Judy, a hopeless romantic who learns to accept her true nature; and Joel (pronounced "Ho-El"), a committed political activist striving for zombie rights. As Grace seeks to get to know the zombies "on their own terms," John is eager to uncover their darker side and rallies to get the crew permission to shoot at a three-day, zombies-only retreat called Live Dead where the documentary takes an unexpected – and dangerous – turn. What transpires there is beyond anything the filmmakers could imagine, as they are forced to re-evaluate their ideas about tolerance, identity politics and the future of the human race.