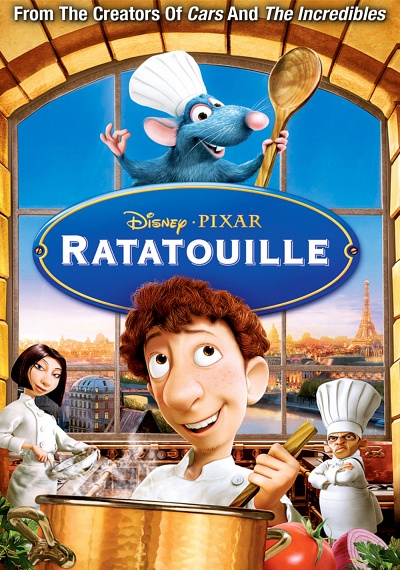 From Academy Award®-winning director Brad Bird (The Incredibles) and the amazing storytellers at Pixar Animation Studios comes Ratatouille, the original comedy about one of the most unlikely friendships imaginable. The film's protagonist is a rat named Remy (Patton Oswalt) who dares to dream the impossible dream of becoming a gourmet chef in a five-star French restaurant. Undeterred by the obvious problem of trying to make it in the world's most rodent-phobic profession, not to mention his family's urgings to be satisfied with the usual trash-heap lifestyle, Remy's fantasies are filled with flambés and sautés. When circumstances literally drop Remy into the Parisian restaurant made famous by his culinary hero, Auguste Gusteau (Brad Garrett), Remy finds the one thing he needs, a friend to believe in him: the restaurant's shy, outcast garbage boy named Linguini (Lou Romano). Remy and Linguini form the most improbable partnership that will turn Paris upside down, leading them both on an incredible journey of comical twists, emotional turns and the most unlikely of triumphs, which they could never have imagined without each other. Ratatouille brings to life a wide-ranging roster of memorable characters with a voice cast that includes Patton Oswalt, Brian Dennehy, Brad Garrett, Janeane Garofalo, Ian Holm and Peter O'Toole.