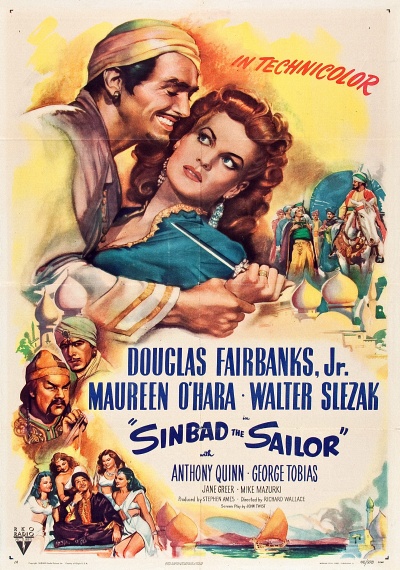 Douglas Fairbanks, Jr., one of the heroes in the adventure classic Gunga Din and son of the silent screen's greatest swashbuckler, shows his own skill at acrobatic derring-do in the title role of this lighthearted adventure spectacular. Eager to find the fabled lost treasure of Alexander the Great, Sinbad unexpectedly has his ship commandeered while in harbor and put up for auction – an auction that our hero wins by a clever ruse. From there an ocean of adventure awaits as Sinbad sets out in quest of the treasure; forms an uneasy alliance with feisty, headstrong adventuress Shireen (Maureen O'Hara, whose flame-red hair and radiant beauty seem almost made for the film's Technicolor® cinematography); deals with the duplicitous Melik (Walter Slezak) and confronts the treacherous Emir (Anthony Quinn). Weigh anchor and set sail with the most wondrous voyage of Sinbad the Sailor!