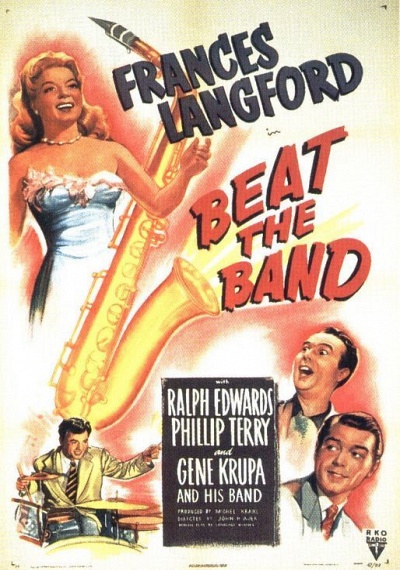 Ann Rogers is a lovely young opera student who would rather croon a mellow swing tune. Handsome Damon Dillingham is her classical voice instructor, although he's really the former leader of a swell big band, and he needs Ann's tuition money to reunite his group for a nightclub gig that follows appearances by Gene Krupa and his band. Can Ann and Damon reveal their true selves, work through misunderstandings and mixed-up feelings, and find romantic and musical bliss? Swing's the thing for Frances Langford (beloved by World War II GIs for her performances overseas with Bob Hope's USO Tours) as she portrays Ann in "Beat the Band." Phillip Terry ("The Lost Weekend") plays Damon, Ralph Edwards (TV's "This Is Your Life") provides comedy fun as a scheming band rep and Gene Krupa isn't just on the nightclub's bill – he's in the movie with a red-hot "Shadow Rhapsody" and more.