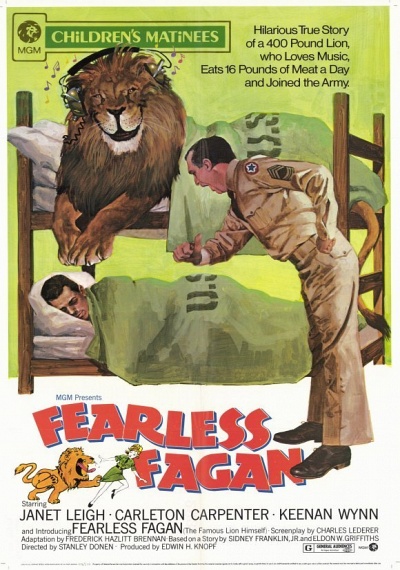 Some real Hollywood heavyweights join forces to make this light but true comedy about a clown, a lion, and the US Army. After Fearless Fagan's story was recounted in Life magazine, Hollywood pounced on the chance to bring the big pussycat to the public. Stanley Donen, fresh off the smash hit Singin' in the Rain, took the reins, with famed screen scribe Charles Lederer (His Girl Friday) pitching in on the patter. Janet Leigh brought the glam, while a lion named Fearless Fagan delivered a roar's worth of charm and comedy playing himself. When carnival clown Floyd Hilston (Carleton Carpenter) gets drafted, he shows up at the army base with an unusual companion in tow  the tame lion he has raised since birth. Unable to find an appropriate caretaker for his feline ward, Floyd must convince his superior, Sgt. Kellwin (Keenan Wynn), to give him time to find Fearless Fagan a home.