Stand by for Action 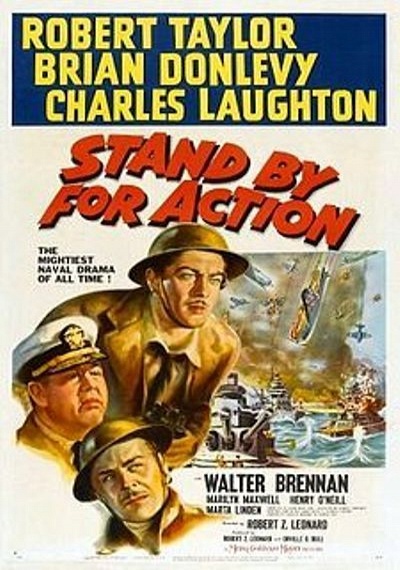 Not long after Pearl Harbor, the U.S. scrambles for ships to put to sea – ships like the dry-docked WWI destroyer Warren. An "old Noah's Ark," scoffs Lt. Gregg Masterman (Robert Taylor), a Harvard-schooled Bostonian ensconced in a cushy desk job. Care to guess who will be volunteered to be the aged ship's executive officer? The character of a callow young man who ultimately proves his worth is one Taylor had played before, notably in A Yank at Oxford and Flight Command. A stellar cast – Charles Laughton, Brian Donlevy, Walter Brennan – joins him in a tale that veers into comic waters (the crew become awkward caretakers of a bevy of infants rescued at sea) before steaming full ahead into the strategies and salvos of fiery battle action in the Pacific. Taylor would actually serve as a Navy Air Corps flight instructor during the war. Lovely Marilyn Maxwell, who debuts here, would entertain troops as a member of Bob Hope's USO tours.