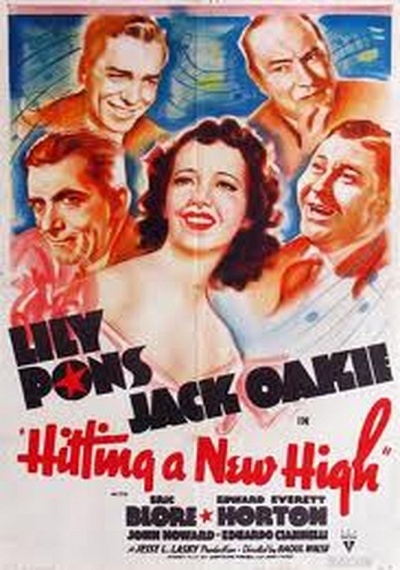 Millionaire opera buff Lucius B. Blynn (Edward Everett Horton) heads to Africa after big game – and bags himself a coloratura. What Blynn doesn't know is that his exotic discovery, Oogahunga the Bird-Girl (Metropolitan Opera legend Lily Pons), is actually a Parisian jazz singer named Suzette, transplanted to the jungle by an enterprising press agent (Jack Oakie) who knows a great story when he makes one up. Raoul Walsh ("White Heat") takes the reins of a zany musical that shifts between the comic (compliments of Oakie, Horton and Eric Blore as an imperious oboist) and the sublime (Pons' glorious voice graces several numbers, including the "Mad Scene" aria from "Lucia di Lammermoor," the opera that catapulted her to renown). The musical director is easy-listening maestro Andre Kostelanetz, who must have made quite an impression on the leading lady: he wed Pons just a few months after "Hitting a New High" premiered.