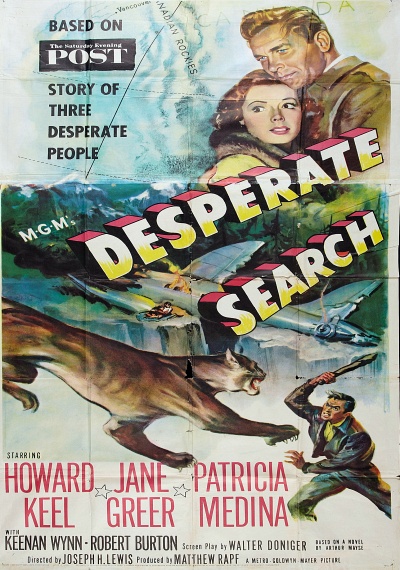 A passenger flight out of Vancouver crashes in remote mountains. On the ground, two lone survivors, a brother and sister perhaps 9 and 7 years old, gather food and blankets. In the air, bush pilot Vince Heldon (Howard Keel), the children's father, guides his plane in a quest to find the downed aircraft. Meanwhile, against this backdrop of search and survival, another drama unfolds: pilot Nora Stead (Patricia Medina) arrives to join the search. She's the ex-Mrs. Heldon, and her presence brings unresolved issues of that broken marriage to the surface while also creating problems for Vince and his new wife (Jane Greer). Joseph Lewis, who grabbed notice with his shoestring noir Gun Crazy, here guides another film admired for getting much from a small budget. Lee Aakers, soon to be famed for his role on TV's The Adventures of Rin Tin Tin, portrays the boy whose survivalist adventure includes confrontations with a mountain lion.