Get to Know Your Rabbit 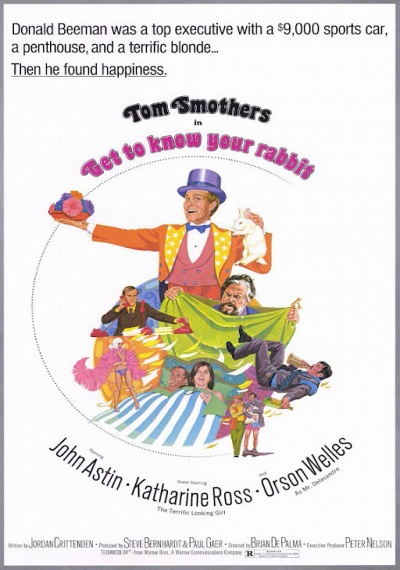 Tom Smothers drops out of the rat race to be a magician in this offbeat comedy directed by Brian De Palma (Scarface, TheUntouchables). He plays Donald Beeman, soon to go up in lights as Beeman the Marvelous. Trained in magic by the odd Mr. Delasandro(Orson Welles) and issued his own rabbit, Donald finds fulfillment – and a special admirer (Katharine Ross) – while wowing locals atstrip clubs and gin mills. But the corporate life he thought he abandoned soon dogs his heels. Tap Dancing Musicians Inc., a 17-day"fantasy dropout camp" engineered by Donald's ex-boss (John Astin), becomes the in thing for slumming CEOs – and Donald is thewidely proclaimed role model. Can Donald abracadabra his way out of this? Get to Know Your Rabbit – and get ready to laugh.