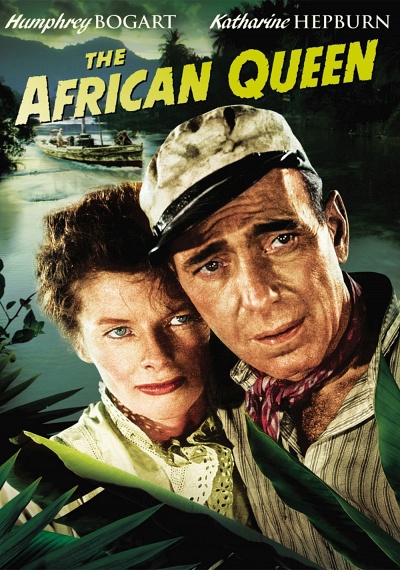 At the start of World War 1, German imperial troops burn down Reverend Samuel Sayer's mission in Africa. He is overtaken with disappointment and passes away. Shortly after his well-educated, snooty sister Rose Sayer (Hepburn) buries her brother, she must leave on the only available transport, a tired river steamboat 'The African Queen' manned by the ill-mannered bachelor, Charlie Allnut (Bogart). Together they embark on a long difficult journey, without any comfort. Rose grows determined to assist in the British war effort and presses Charlie until he finally agrees and together they steam up the Ulana encountering an enemy fort, raging rapids, bloodthirsty parasites and endlessly branching stream which always seem to lead them to what appear to be impenetrable swamps. Despite opposing personalities, the two grow closer to each other and ultimately carry out their plan to take out a German warship.