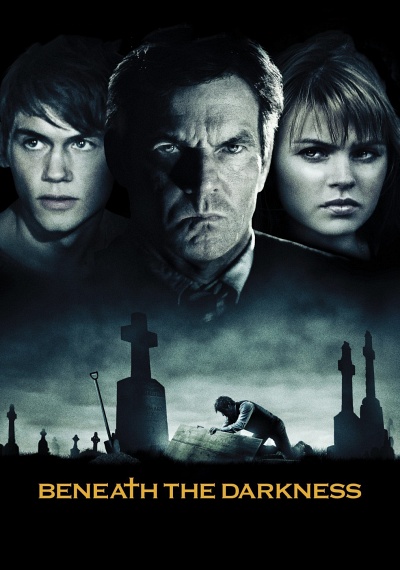 BENEATH THE DARKNESS is a teen thriller in the style of Disturbia, with high school kids pitted against a psychotic villain in a community where adults refuse to see one of their own is a serial killer. The villain (Dennis Quaid) is a well-respected mortician in a town where he was once a legendary high school football star. But among the kids he is legendary for a more sinister reason - rumors that his house is haunted. The truth is more evil and much more dangerous – the town leader murdered his wife and her lover when he caught them having an affair, and now has secretly set up house with his wife's embalmed corpse. The local hero is a flesh-and-blood monster who buries his victims alive, a sociopath who befriends adults and police while openly flaunting his murderous intentions to the teens. He will kill anyone who threatens to expose him or his now-perfect marriage.