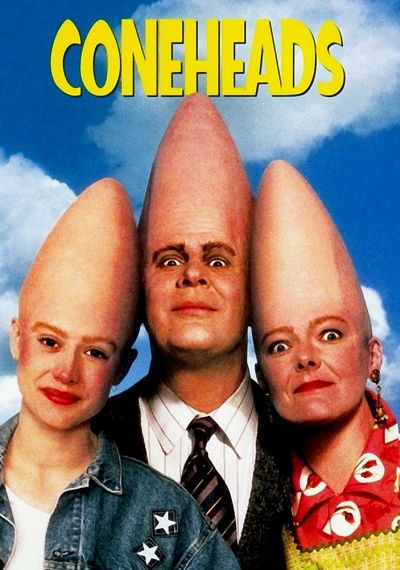 The Coneheads were a sketch on the Saturday Night Live television show of the late '70s which were expanded to feature-length proportions with this film. The story concerns Beldar (Dan Aykroyd) and Prymaat (Jane Curtin), who leave the planet Remulak to prepare for an invasion of Planet Earth. But due to a malfunction, they find themselves plunged into the Hudson River and forced to take up residence in Paramus, New Jersey where Beldar gets work as an appliance salesman and makes a deal for a phony social security card. Before long, all thoughts of invading Earth are left behind as Beldar and Prymaat quickly adapt to suburban life — except for their coneheads and metallic-sounding voices, they become a typical middle-class suburban family. The Coneheads have a child, Connie (Michelle Burke) and Beldar becomes a New York cab driver and starts up his own driving school. Connie grows into a teenager and a neighborhood boy, Ronnie (Chris Farley), develops a crush on her because he likes to rub her conehead. But a nefarious INS agent, Gorman Seedling (Michael McKean), and his toady assistant, Turnbull (David Spade), are hot on The Coneheads' trail because of Beldar's false social security card. Not only that, but the Remulakian Highmaster (Dave Thomas) is beginning to wonder what ever happened to Beldar's invasion of the third rock from the sun.