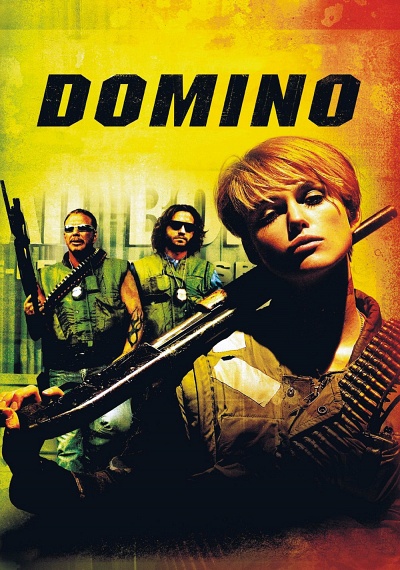 The (mostly) true story of a Hollywood princess turned bounty hunter is told in this witty action-drama from director Tony Scott (True Romance, Man on Fire). Domino Harvey was the daughter of famed actor Laurence Harvey who passed on when Domino was only eight years old. Domino's mother, former fashion model Paulene Stone and renamed Sophie Wynn in the film, strove to give her daughter a comfortable life, but Domino was naturally rebellious, and after a contentious stint in boarding school, a brief career as a runway model, and a fling with the fashion business, Domino was looking for something more exciting. She found it when he met Ed Mosbey, an ex-con who had gone on to a successful career as a "bail recovery agent" in short, a bounty hunter. Ed also taught others how to join his profession, and Domino took his course and joined his team, along with Choco, a headstrong bail agent who took an immediate fancy to Domino. Domino, Ed, and Choco became a successful team successful enough that television producer Mark Heiss asked them to become the subject of a television reality series. However, it was after the cameras were turned on Domino that her life got truly crazy. Bail bondsman Claremont Williams III had hired Domino and her friends for a risky case, and soon Domino, Ed, and Choco were chasing missing men and money while landing in hot water with both the FBI and the Mafia. Domino was loosely based on Domino Harvey's real life story; sadly her personal life was as reckless as her career, and Domino died as a result of drug abuse on June 27, 2005, after this film was completed. Starring Academy Award and Golden Globe-nominee Keira Knightley (Atonement, Pride and Prejudice), Mickey Rourke (9½ Weeks, Sin City), Edgar Ramirez (The Bourne Ultimatum, Vantage Point), Delroy Lindo (Gone in Sixty Seconds, Romeo Must Die) and Academy Award-winner Christopher Walken (The Deer Hunter, Catch Me If You Can).