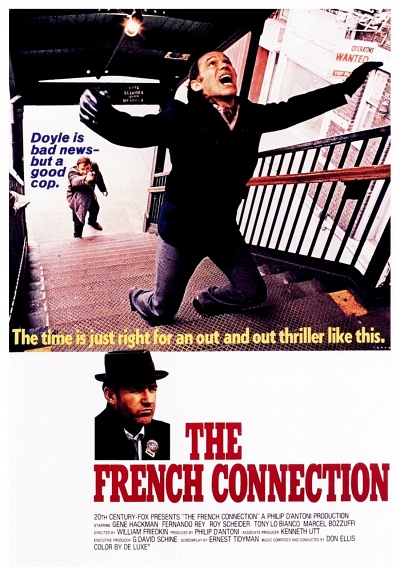 The French Connection is William Friedkin's gritty, Oscar®-winning police drama where two tough New York City cops try to intercept a huge heroin shipment coming from France. Police partners Popeye Doyle (Gene Hackman) and Buddy Russo (Roy Scheider) put a candy store under surveillance based on a hunch that something fishy was going on. Eventually it turns out that the proprietors are involved in one of the biggest narcotics smuggling rings on either side of the Atlantic, and the cops go to work. Popeye Doyle is a short-tempered alcoholic bigot, but he is nevertheless a hard-working and dedicated police officer. Doyle's nemesis is Alain Charnier (Fernando Rey), a suave and urbane gentleman who is a criminal, and one of the largest suppliers of pure heroin to North America. As money troubles begin for the hoods they decide to kill Popeye and Buddy to give them enough room to bring in the heroin.