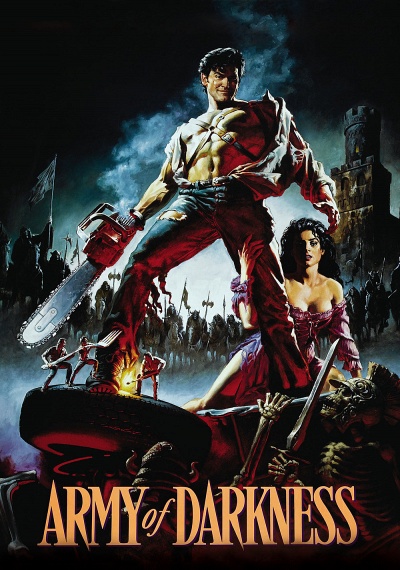 The third in director Sam Raimi's stylish, comic book-like horror trilogy that began with The Evil Dead (1982), this tongue-in-cheek sequel offers equal parts sword-and-sorcery-style action, gore, and comedy. Bruce Campbell returns as the one-armed Ash, now a supermarket employee ("Shop Smart...Shop S-Mart") who is transported by the powers of a mysterious book back in time with his Oldsmobile '88 to the 14th century medieval era. Armed only with a shotgun, his high school chemistry textbook, and a chainsaw that mounts where his missing appendage once resided, the square-jawed, brutally competent Ash quickly establishes himself as a besieged kingdom's best hope against an "army of darkness" currently plaguing the land. Since the skeleton warriors have been resurrected with the aid of the Necronomicon (the same tome that can send Ash back to his own time) he agrees to face the enemy in battle. Ash also finds romance of a sort along the way with a beautiful damsel in distress, Sheila (Embeth Davidtz), and contends with his own doppelganger after mangling an important incantation.