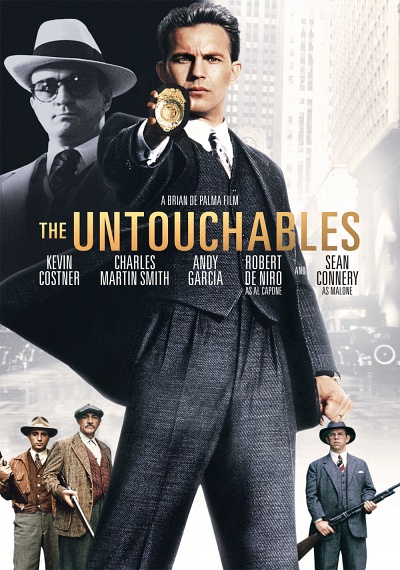 Like the TV series that shared the same title, The Untouchables (1987) was an account of the battle between gangster Al Capone and lawman Eliot Ness, this time in the form of a feature film boasting big stars, a big budget, and a script from respected playwright David Mamet. Kevin Costner stars as Ness, a federal agent who has come to Chicago during the Prohibition Era, when corruption in the local police department is rampant. His mission is to put crime lord Capone (Robert De Niro) out of business, but Capone is so powerful and popular that Ness is not taken seriously by the law or the press. One night, discouraged, he meets a veteran patrolman, Jimmy Malone (Sean Connery), and discovers that the acerbic Irishman is the one honest man he's been seeking. Malone has soon helped Ness recruit a gunslinger rookie, George Stone (Andy Garcia), and, joined by nebbish accountant Oscar Wallace (Charles Martin Smith), the men doggedly pursue Capone and his illegal interests. At first a laughingstock, Ness soon has Capone outraged over his and Malone's sometimes law-bending tactics, and the vain mobster strikes back in vicious style. Ultimately, it is the most unexpected and minor of crimes, tax evasion, which proves Capone's undoing. All of the credits for The Untouchables boasted big names, including music from Ennio Morricone and costumes by Giorgio Armani. Director Brian De Palma continued his tradition of including a homage to past masters of the cinema with a taut stairway shoot-out reminiscent of a similar sequence in Sergei Eisenstein's Battleship Potemkin (1925). ~ Karl Williams, Rovi