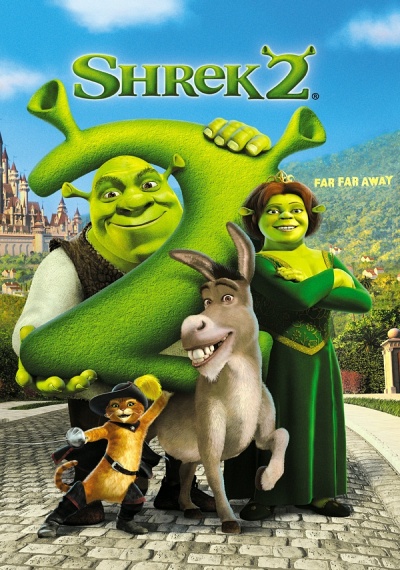 The cranky beast with a heart of gold returns to the big screen in this sequel to the computer-animated smash hit Shrek. After massive green ogre Shrek (voice of Mike Myers) and his new bride, Princess Fiona (voice of Cameron Diaz), return from their honeymoon, they receive an invitation to visit Fiona's parents, King Harold (voice of John Cleese) and Queen Lillian (voice of Julie Andrews), who are the monarchs of The Land Far, Far Away. However, the king and queen are more than a bit alarmed to discover their new son-in-law is a monster the color of algae, and that their daughter's little problem with a magical spell gone wrong has turned into a full-time skin condition. Certain this isn't the sort of "happily ever after" they dreamed of for their daughter, King Harold decides to take Shrek out of the picture and return Fiona to her former beauty with the help of Prince Charming (voice of Rupert Everett), the Fairy Godmother (voice of Jennifer Saunders), and ogre-slaying feline Puss in Boots (voice of Antonio Banderas). Shrek 2 also features the voice of Eddie Murphy returning as Donkey, as well as Larry King as an Ugly Stepsister.