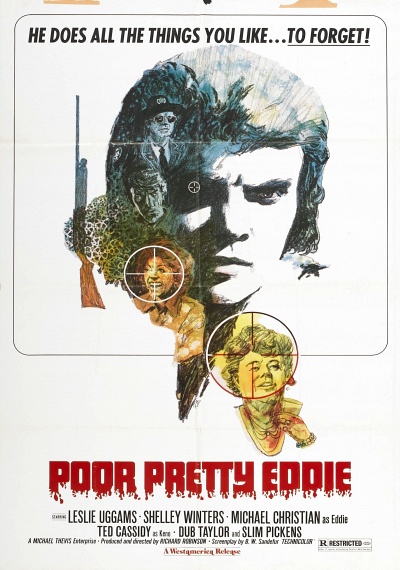 Poor Pretty Eddie is a surreal psycho-thriller that broke all the rules of B-movie film-making when it unleashed its sordid tale of a black celebrity from the big city stranded in a backwoods redneck nightmare. Liz Wetherly (Leslie Uggams) is a popular singer just looking for a little break from her hectic schedule. But when her car breaks down, she ends up stuck in a remote southern town that's been left for dead "ever since they put in the interstate." Forced to spend the night, she finds herself having to endure "Bertha's Oasis", a rundown lodge that serves as the bizzaro fiefdom of faded, overweight burlesque star Bertha (Shelly Winters), her much younger boy-toy and aspiring Elvis wannabe, Eddie (Michael Christian), and a cast of suitably strange townsfolk.