It Came from Kuchar 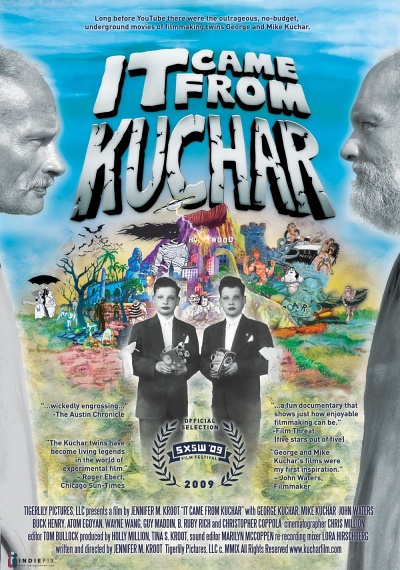 Long before YouTube, there were the brilliantly insane, no-budget movies of underground, filmmaking twins George and Mike Kuchar. Creating stars out of their friends and family with just consumer-grade cameras, the teenage Kuchar brothers went from the 1960's New York City underground film scene of Andy Warhol and Kenneth Anger to become the twin maestros of B-movie glamour and sleaze. Their wildly warped films such as "I Was a Teenage Rumpot", "Sins of the Fleshapoids" and "Hold Me While I'm Naked" stunned the screen with seedy Hollywood glamour, anything-goes sexuality, hilarious robots and prepubescent toilet humor – and influenced an entire generation of filmmakers. In a mesmerizing stream-of-consciousness style, IT CAME FROM KUCHAR effortlessly interweaves nostalgic footage of 1950's New York, a "greatest hits" collection of Kuchar clips and present day interviews of an all-star lineup of fans including John Waters, Buck Henry, Atom Egoyan, Wayne Wang, Bill Griffith, Gerard Malanga, B. Ruby Rich and Guy Maddin. Both outrageous and lovable, George and Mike will inspire you to pick up a camera and start making movies. IT CAME FROM KUCHAR is a must see for lovers of film everywhere.