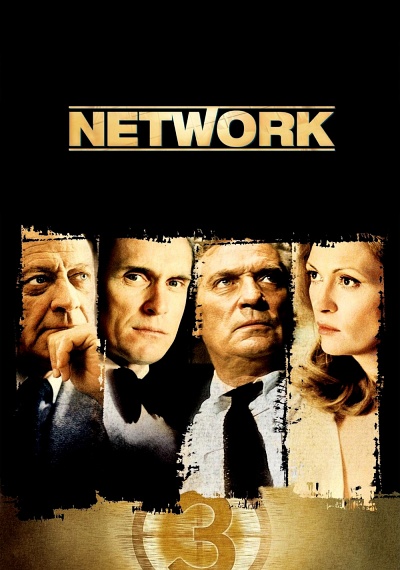 A trenchant satire of "trash TV," Network seems to grow only more relevant with each passing year. Howard Beale (Peter Finch), the dean of newscasters at the United Broadcasting System, is put out to pasture because he "skews old." Network executive Max Schumacher (William Holden), Howard's best friend, is forced to deliver the bad news. Beale can't stomach the idea of losing his 25-year post as anchorman simply because of age, so in his next broadcast he announces to the viewers that he's going to commit suicide on his final program. Network head Frank Hackett (Robert Duvall) is all for kicking Beale out then and there, but when it looks as though the UBS is going to have its greatest ratings ever on the night of Beale's self-destruction, ambitious programming exec Diana Christensen (Faye Dunaway) talks Hackett into treating that fateful final telecast as a special event. Naturally, Beale doesn't go through with it -- but he does begin rambling about the horrible state of the world in general and television in particular. He concludes his tirade by admonishing his viewers to "Go to the window and shout as loud as you can: 'I'm mad as hell and I'm not going to take it anymore!'" With that, Howard Beale becomes the hottest TV personality in America, and Diana becomes the network's fair-haired girl. She draws up plans to treat the nightly news broadcast as garish entertainment (complete with a psychic), all built around the rants of Beale, billed as "The Mad Prophet of the Airwaves." Network won Oscars for Paddy Chayefsky's screenplay as well as for three of four acting categories -- Dunaway for Best Actress, Peter Finch for Best Actor (in the only posthumous Oscar yet awarded), and Beatrice Straight for Best Supporting Actress, in one of the shortest-screen-time performances ever to win an Oscar.