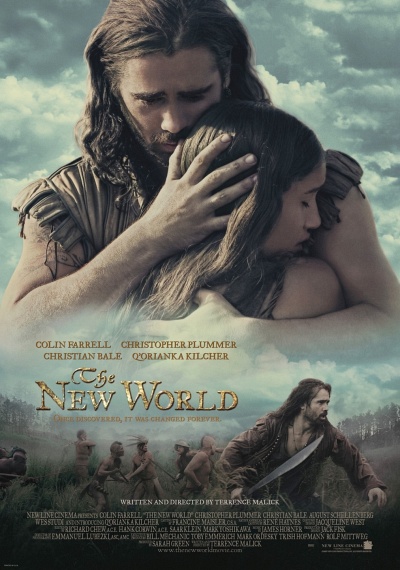 Amid the clash of European and Native American cultures following the founding of Jamestown, Virginia, in 1607, the legendary romance of an English explorer, Captain John Smith, and a beautiful Indian princess, Pocahontas, is transformed into a sweeping exploration of love, loss and discovery, both a celebration and an elegy for the America that was...and the America that was yet to come. The forbidden love of the passionate, noble young native and the ambitious soldier of fortune puts the pair at odds with their undeniable obligations to their own people and the inescapable demands of the human heart in the historical adventure epic The New World. Starring Colin Farrell ("Alexander," "Daredevil"), Christian Bale ("Batman Begins," "The Dark Knight"), Q'orianka Kilcher ("How the Grinch Stole Christmas") and Golden Globe-nominee and Emmy Award-winner Christopher Plummer ("Alexander," TV's "Madeline," "American Tragedy"). Written and Directed by Academy Award and Golden Globe-nominee Terrence Malick ("The Thin Red Line," "Days of Heaven").