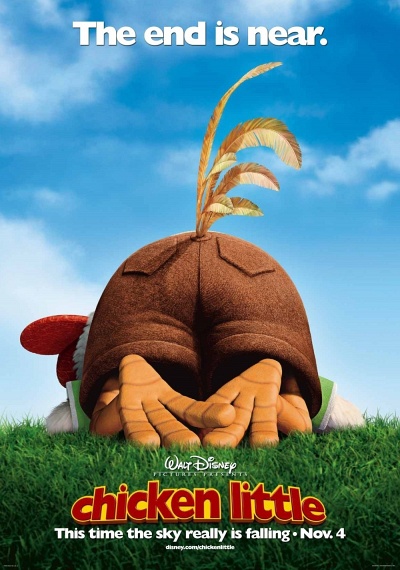 An old fable gets a high-tech update in this computer-animated comedy from Walt Disney Pictures. Chicken Little (voice of Zach Braff) is an earnest young fowl living in the town of Oakley Oaks who one day starts a panic when a falling acorn drops on his head, and he warns everyone that the sky has started to collapse. Chicken Little was wrong, of course, much to the embarrassment of his father, Buck Cluck (voice of Garry Marshall), and now the young chicken is struggling to live down the incident. While his best friends Abby Mallard (voice of Joan Cusack), Runt of the Litter (voice of Steve Zahn), and Fish out of Water stand by him, the school's star athlete Foxy Loxy (voice of Amy Sedaris) never passes up an opportunity to make fun of the diminutive chicken. As a result, Chicken Little tends to keep his more recent discoveries to himself, but what's a bird to do when he uncovers pseudo-scientific evidence that suggests the sky really is starting to fall, in large hexagonal chunks? Chicken Little was directed by Mark Dindal, who previously helmed The Emperor's New Groove for Disney.