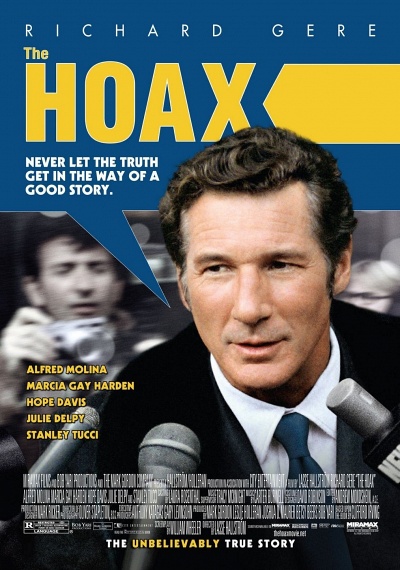 In 1971, author Clifford Irving is feeling cheated when his latest manuscript, which looked sure to be published by McGraw-Hill, is ultimately rejected. After that rejection, his primary contact at the publishing house, Andrea Tate, seems ready to place him on her do not call list. As such, Clifford tells her that he is working on the most important book of the twentieth century, which in reality is a total fabrication, as is his ultimate idea for the book: that he has been asked by billionaire recluse Howard Hughes to write his autobiography. Clifford, who has never met Hughes and has never been contacted by Hughes, is banking on past history of Hughes not coming out in public to decry Clifford's book as being a fake, as is the situation with a current case involving TWA which could cost Hughes monetarily if the case goes against him and which Hughes has not come out publicly to defend. If Clifford's assertions of the book are indeed true, Andrea and her colleagues at McGraw-Hill are highly interested. Along for the ride with Clifford are his long time friend and researcher, Dick Suskind, who likes the idea when it seems to be working, but seems ready to fold under the pressure whenever they are close to being caught; and Clifford's artist wife, Edith Irving, who takes on the pseudonym Helga R. Hughes to be able to cash the checks made out to H.R. Hughes. Clifford and Dick luck into personal information about Hughes which would assist in writing an accurate autobiography. They also mysteriously come into possession of some information which if included in the book would entirely change its focus but have the potential for far reaching political consequences. But Clifford's personal life, which includes an affair with actress Nina Van Pallandt, and his own grip on what is true and isn't may ultimately be his downfall.