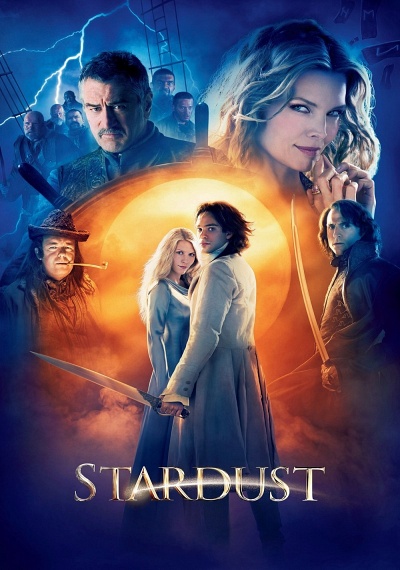 A charmingly naïve boy from the English village of Wall travels to a magical, mythical world in search of the falling star that will help him win the heart of his true love in this fantasy adventure starring Charlie Cox, Claire Danes, Robert De Niro, Michelle Pfeiffer, Ricky Gervais, and Sienna Miller. For hundreds of years the massive cobblestone barrier that surrounds the sleepy English hamlet of Wall has kept the citizens of the village safe and secure from the malevolent supernatural forces that stir just outside its perimeter. When dashing Tristran Thorn (Cox) promises the fairest girl in the village, Victoria (Miller), that he will prove his love by bestowing her with a genuine falling star, his daring mission sends him on an adventure far outside the comfortable confines of Wall. In order to find the fallen star, Tristran will have to ascend the wall and venture deep into the forbidden heart of the fantastical realm known as Stormhold. Upon discovering that the meteorite he sought was in fact a beautiful girl named Yvaine (Danes), who has stumbled though space and is now being pursued by the King of Stormhold's (Peter O'Toole) sons (who long to use her cosmic powers to lay claim to the throne), Tristran vows to protect the otherworldly visitor at all costs. But the King's sons aren't the only ones in search of the luminous Yvaine; fearsome witch Lamia (Pfeiffer) has become convinced that the young girl's power can help her to achieve eternal youth and beauty. As Tristran makes his way through Stormhold on a mission to bring the star back to Wall, he will encounter a series of spectacular characters and creatures that will lead him to a fate he never imagined. Layer Cake director Matthew Vaughn serves as screenwriter and director for this tale of witches and pirates adapted from the novel by fantastic literature icon Neil Gaiman, who also produces.