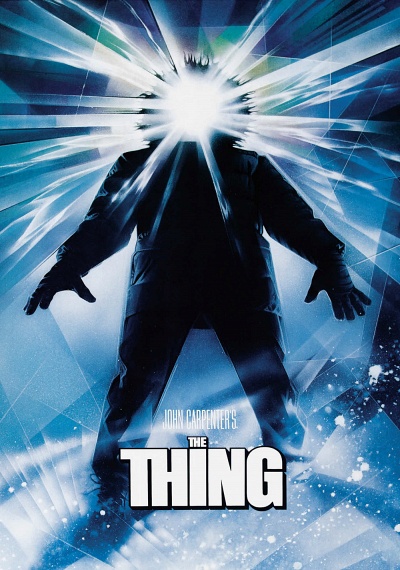 John Carpenter's The Thing is both a remake of Howard Hawks' 1951 film of the same name and a re-adaptation of the John W. Campbell Jr. story "Who Goes There?" on which it was based. Carpenter's film is more faithful to Campbell's story than Hawks' version and also substantially more reliant on special effects, provided in abundance by a team of over 40 technicians, including veteran creature-effects artists Rob Bottin and Stan Winston. The film opens enigmatically with a Siberian Husky running through the Antarctic tundra, chased by two men in a helicopter firing at it from above. Even after the dog finds shelter at an American research outpost, the men in the helicopter (Norwegians from an outpost nearby) land and keep shooting. One of the Norwegians drops a grenade and blows himself and the helicopter to pieces; the other is shot dead in the snow by Garry (Donald Moffat), the American outpost captain. American helicopter pilot MacReady (Kurt Russell, fresh from Carpenter's Escape From New York) and camp doctor Copper (Richard Dysart) fly off to find the Norwegian base and discover some pretty strange goings-on. The base is in ruins, and the only occupants are a man frozen to a chair (having cut his own throat) and the burned remains of what could be one man or several men. In a side room, Copper and MacReady find a coffin-like block of ice from which something has been recently cut. That night at the American base, the Husky changes into the Thing, and the Americans learn first-hand that the creature has the ability to mutate into anything it kills. For the rest of the film the men fight a losing (and very gory) battle against it, never knowing if one of their own dwindling number is the Thing in disguise. Though resurrected as a cult favorite, The Thing failed at the box office during its initial run, possibly because of its release just two weeks after Steven Spielberg's warmly received E.T.The Extra-Terrestrial. Alo