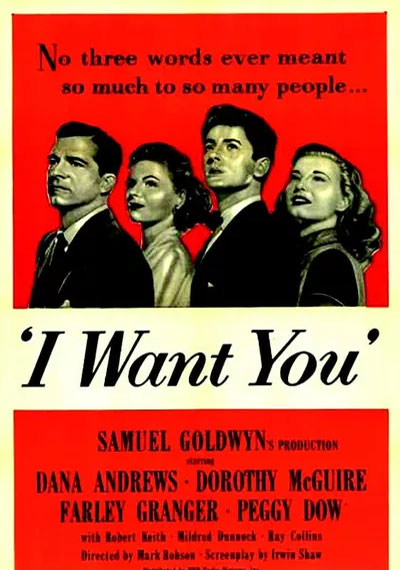 Upon beginning production on his Korean-war drama I Want You, producer Sam Goldwyn lamented "I've just brought those boys back from the war, and now I have to send them out again!" Goldwyn, of course, was referring to his Oscar-winning "homecoming" drama Best Years of Our Lives. He'd hoped that I Want You would be 1951's "answer" to that post-WW II classic, and while the later film falls short of that goal, it still has much to recommend it. The scene is a small town in the Eastern United States, where the outbreak of hostilities in Korea has a profound effect on several people. WW II veteran Martin Greer (Dana Andrews) wants to re-enlist, much to the dismay of his wife Nancy (Dorothy McGuire).