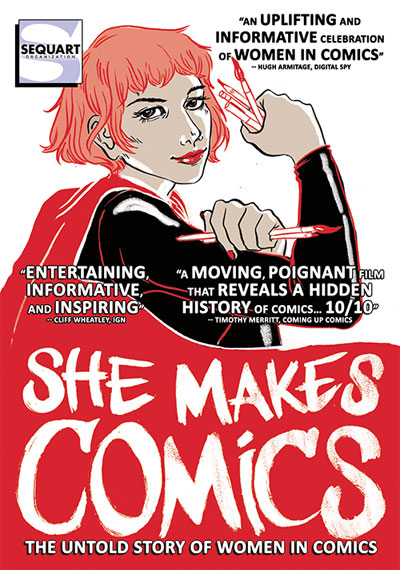 She Makes Comics tells the little-known story of women in comics, highlighting the contributions they have made to the medium since the turn of the 20th century. It features interviews with such prominent figures as historian Trina Robbins, Captain Marvel writer Kelly Sue DeConnick, underground comics artist Joyce Farmer, former DC Comics publisher Jenette Kahn, Elfquest creator Wendi Pini, DC/Vertigo founder Karen Berger, and dozens of others. She Makes Comics traces the fascinating history of women in the comics industry. Despite popular assumptions about the comics world, women have been writing, drawing, and reading comics since the medium's beginnings in the late 19th century. And today, there are scores of women involved in comics and its vibrant fan culture. Featuring dozens of interviews with such vital figures as Ramona Fradon, Trina Robbins, Joyce Farmer, Karen Berger, Kelly Sue DeConnick, and Becky Cloonan, She Makes Comics is the first film to bring together the most influential women of the comics world.