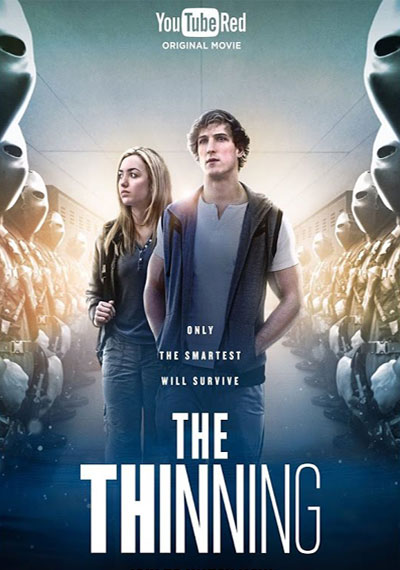 In the near future, every nation in the world has to eliminate 5% of their population, as mandated by the United Nations. The United States chose THE THINNING -- the act of eliminating students in every grade who scores a C or lower. Schools annually go under a lock-down procedure in which all students take a standardized test. The Thinning became the prevailing method in the United States as it was heavily backed by powerful political figures. The PR spin that helped to sell most civilians is that it "Keeps America competitive and ahead in Innovation".Blake, 17, finds himself at odds with the status quo. The son of a powerful Governor, Blake intends to send a message to the country by purposefully failing his final exam and being sent to the thinning. Blake's father Dean, 42, is a staunch supporter of the Thinning and will do whatever it takes to defend it… even having his son's failed exam switched with another student's passing exam. Laina, 17, a diligent, hard-working student, has worked her entire life to be the best in her class. Laina is rattled to find out that she did not make the grade and will be sent to the thinning, leaving her two younger siblings behind. Unwilling to die unjustly, Laina escapes the shackles of euthanasia to prove her own innocence and vows to uncover the truth. Once Blake purposefully fails the test but finds out he has passed, he and Laina begin to investigate and uncover an elaborate conspiracy behind the scenes of the government and the entire thinning program.